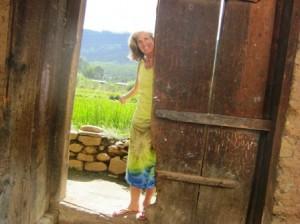 Welcome to the Happy Kingdom of the Himalayas

So, on my website it says it all started with mudpies. True but also true is I won a 6th grade cake baking contest after creating mystery cakes in my Betty Crocker play kitchen and cooking with my grandma in her little kitchen. She lived in a lower unit of my Aunt and Uncle’s house atop Queen Anne hill in Seattle. All were part of the First Free Methodist church and Seattle Pacific College, both strict and repressive yet homey and family oriented.

The truth also is I watched my other Aunties and mom hit the church potluck tables and home group dinners and then complain about their weight. Americana fifties food was just that, an embodiment of tuna noodle casserole, green beans and canned mushroom soup heated together with a topping of potato chips, crumbled. Another specialty was green Jell-O with cottage cheese and canned pineapple and that was considered the healthy dish. It was and is the ‘good girl’ drug and no one drank, danced, swore or even raised their voice in anger or animation.

Hey, some of it was good too – the homemade breads, green salads, garden vegetables, fruit cobblers and desserts but the sheer volume was appalling or amazing depending on your view. Other countries have poked fun at America’s serving sizes but I just went to the (no nutrient density) Cocaine Chardonnay diet in rebellion and self-defence.  Ha ha for a short time only and then full circle to sobriety in 1983.

The conundrum is to train and study as a Cordon Bleu chef and Home Economist, eat for a living creating cookbooks, but not too much and exercise every day. The stats are that diet books and cookbooks are both big sellers. Also that many are starving while others are dieting. Then of course, there is the global food waste! The point to me now is that growing and eating local healthy foods, low on the food chain and seasonal also results in sustainable living and an eco-ethicurean life-style (my invented word).

So to these points I’ve been writing, teaching, consulting and travelling for 3 decades now! In the early 80’s I did television tours, food styling for film and print and media trips where the proverbial red carpet was rolled out with a big budget welcome mat. My early times with IFWTWA (International Food Wine Travel Writers Association) provided multiple media memories from Hawaii to California, Idaho to the Florida cays.

Now living in Australia for the last 13 years (ok, so I accidentally married the wrong Queenslander) I love it here in Perth! The media trips are much more difficult to obtain but that doesn’t stop me from trying! Nothing much came of my efforts last year in Argentina and Uruguay but this year and for a year I’ve pitched going to Bhutan. I was supposed to go with that former husband to the Himalaya’s but he made the trek solo and left me behind in the un-renovated Queenslander house. I always did say recipes are easier than relationships! Still I gave it a go and ended here in my dream country and presently in the best weather state of Western Australia. And now I get to go by myself on a tour, trek and foodie trip to their mushroom festival, rainy season or no! Such a whimsical coincidence that I just finished my first murder food mystery and the murder weapon is death cap mushrooms! Let me know if you’d like to be a first reader and it comes with yummy (non-poisonous) recipes!

I’ll be back with a new Bhutanese e book cookbook from my newest foodie journey. They often combine my two favourite ingredients ~ chiles and mushrooms! I like a spicy culture and cuisine!