It all started with mud pies – no. It was the 6th grade cake baking contest I won when my mom told me to add orange juice to the cake batter to make it moister. Then she encouraged me to do and be anything I wanted, to pursue every dream.

So I wrote to Julia Child in high school and she wrote back to me! Her suggestion was to go to the Cordon Bleu in London not Paris and learn the principles and fundamentals of the culinary arts. After I saw the film Julie & Julia I understood. I did train at the Cordon Bleu after a 3 year reservation and met Julia and her husband Paul, 10 years later.

Originally, to get me away with fooling with mud pie recipes and out of the kitchen my parents bought me a pair of roller skates. Remember those one that are tightened with a key? I can still remember the feeling of complete freedom and with the wind in my hair, going faster and faster. None of these modern helmets elbow and knee pads, for us, we used to just go for it.

Now, I still skate on for the freedoms and adding even more memories and fun points. I must admit still without all the safety gear. I remember skating all over the neighborhood and beyond when I was a youth and my dad had to blow his piercing whistle through his hands to get me back before dark. This was Queen Anne Hill in Seattle, so I started on steep hills up and down.

Later I graduated to the boot style in-line skates and had multiple competitions with my beautiful cousin, Jackie (Jacqueline) Jordan. It was a challenge at first to remember to slow on the back break not the front stopper! ‘Jake’ went on to become the fastest skater in 3 states: Idaho Washington and Oregon winning over others, 20 years younger. I will never forget I did win the 10k race in Sea 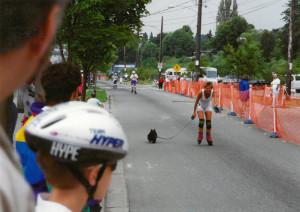 Always more fun to race with my dog Scotty Fitzgerald in Seattle!

ttle and she won the 5k race so we were both on a pedestal that day. I knew I couldn’t take her even then in a sprint 5k!

However, wherever I travelled or lived I took my one, two then three pair of skates. It was so much more enjoyable than jogging and a great way to see the surrounds. Plenty of people of all ages skate in California even doing tricks at Venice Beach in bikinis and less. I wasn’t one of them as I like to go far and fast.

There were so many great flat paths along Marina del Rey through Manhattan Beach then Hermosa and all the way to the foot of hamburger hill our affectionate name for Palos Verdes where the homes were so expensive the owners could only eat hamburger or mince as it’s called here in Oz.

I really had an exciting time in Fort Liquordale, I mean Fort Lauderdale, Florida joining the River Rollers and skating at night or on week-ends away up to 25k. After a certain amount of training I became a skate patrol instructor offering free coaching and braking clinics to neophyte skaters or band aids as needed. We wore a special red t shirt with a white cross on the back and especially proposed lessons to the cute guys or asked them to catch us as we couldn’t stop to scare them! 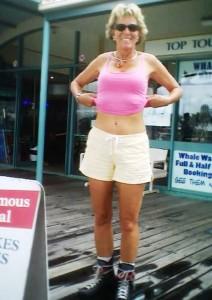 The whole area is so flat it was a breeze to skate all over the finger isles along the New River at nights in a pack looking like a big lightening bugs with flashing lights fore and aft. Many eves it was so warm we just wore shorts and tees and started and ended up in the local Downtowner pub to quench the thirst. Up to 200 skaters would cruise along the exclusive Rio Vista neighbor-hood around 12 miles on Tuesday and Thursday nights.

When I came to Queensland there were more skate parks than skate lanes so I tried my sideways twist on the lower ramps and was always the oldest skater having a go. When I first went to Adelaide I was skatingaround the pier zone. I’ll never forget this 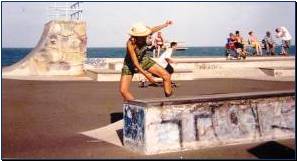 little darling boy in his adorable school uniform looked up at me and said, “It’s not often you see a mum roller skating!”

On the other side of cute I had a twilight skate in Phoenix, Arizona before a morning guest chef show with Rita Davenport. Somehow I, who never falls, tumbled   over an unseen crack and cracked my front tooth right off. I had to go on TV anyway with a snaggle tooth! 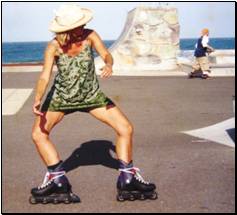 The only time I saw the Muscovite Russians smile was when I in-line skated around the Red Square grinning myself with glee! It was a chef exchange when I was in the San Diego chapter and I was the only female chef who was invited. On the other hand the Soviet Georgians were full of joie d’vivre and had all the good foods and long tables for feasting.

This is another reason why I skate; to counteract the eating for a living that I must do. If not reviewing restaurants or resorts, I’m testing new dishes and recipes or travelling and learning more about Ethnic foods. How does it go? Someone has to do it!

And what happens too it’s a mood changer for the good just to go for even a short run. Skating reminds me of cross country skiing gliding along effortlessly on champagne pavement, smooth as Grace

Jones back. Unless I’m heading down hill then it feels like downhill racing or even flying. It’s an instant mood enhancer like riding a motor bike, but with better exercise!

If I wear my Ray bans and summer attire I still get the odd wolf whistle as I wheel along. Once though some lad yelled out “Go granny go!” If I do ever need a zimmer frame this will be me! 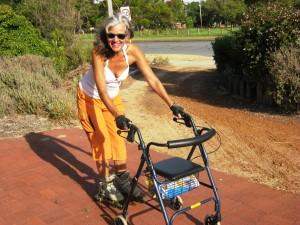 Finally, just this year for my birthday, I’m the proud owner of K2’s with the Boa system of tightening the boot from Skater Headquarters in Sydney ~ www.skaterhq.com.au. Look below to see my latest mature (lol) modelling job with new skates and feel free to like and befriend me on Face book! 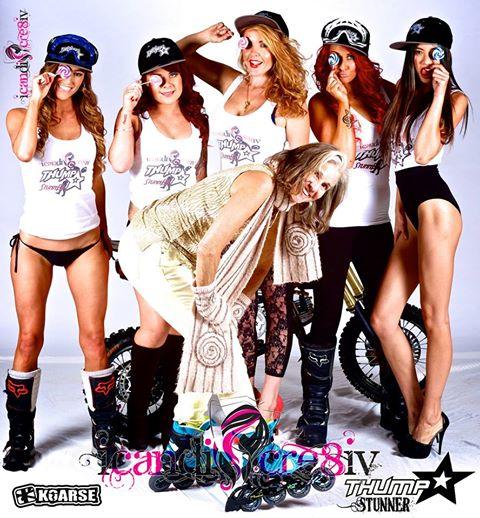